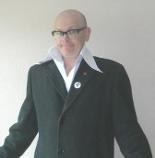 So who on earth is the splendidly titled: Toppermost Entertainment?

Introducing - Johnny aka Mister T aka that bald one....

Bumbling, bald, big-eared Johnny is a versatile performer, who has spent many years delighting children and families everywhere: CITV, The Royal Palladium and Wembley Stadium are just some of the places he hasn’t performed. However, you may have seen him in CBBC's Twirlywoos; or witnessed his intense and emotional portrayal of Captain Codseye in the Royal Spa Theatre’s production of Dick Whittington; or experienced one (or more!) of his popular touring Toppermost shows, which have been running now for longer than a really long thing.

His talents (and cheap fees) have made him popular right across the globe: in Blackpool he won a limbo dance contest (he hasn’t walked properly since); taught & performed with kids in the USA (98% of his students have gone on to successful non-performing careers); worked as an all singing/dancing/juggling/magic performing/jazz hand waving entertainer in France (Il parle Francais comme une vache espagnole); dressed up as a giant mouse for channel 4 Roadshows (don’t ask); regularly surfed an ironing board down a hill in Surrey (again, don’t ask); and reached the semi-finals of the Daily Telegraph Stand-up Comedy Competition - narrowly failing to reach the grand final, simply because the judges didn’t find him funny (a minor detail)

After losing his hair in a prank outside Debenhams, he ignored the call of the comb-over, said ‘certainly not’ to a syrup, and steadfastly refused the regaine. He polished his pate, and went forward into a cruel hairy world - appearing in a commercial for After Eight Mints (the happy bald man); in The Adventures of Lord Haw Haw, at the Luton Library Theatre (a variety of bald characters); there was Rainbow theatre’s production of King Arthur’s Adventures’ (A Bald Merlin the Wizard); toured in Baldilocks & the Three Hairs (have a wild guess); and most recently in a music video for Irish band Le Galaxie (The puzzled bald man).

For many years he has been East Bromley's third favourite Harry Hill impersonator.

His varied career has continued with many more adventures, each one more similar than the last.

At present he continues to run Toppermost Entertainment - sprinkling fun and laughter on unsuspecting audiences everywhere!

What free time Johnny has, he likes to spend memorizing weather statistics, and taking part in competitive ukulele strumming.

'Johnny Who?' The Bedfordshire Clanger

And here is a selection of what actual human people have said about him:

'What did you used to do in the old days' A misguided child.

'aren't you getting a bit old to be doing this?' A misguided adult.

'The best entertainment in town' A person who clearly knows what he's talking about. Clearly. (thank you Volker Balleuder).

To read more comments just go to the Comments page, where you'll be able find lots of, well......comments!